The Viking Sky cruise ship lost power as it sailed toward Stavanger, Norway in heavy seas and wind today. The cruise ship issued a mayday call and many passengers were evacuated from the cruise ship via helicopter as the ship rocked back and forth in stormy weather.

Passengers were reportedly being hoisted one-by-one by rescue helicopters from the stranded cruise ship as strong winds pushed the ship toward the Hustadvika coast of Norway, which is considered one of the most dangerous parts of the Norwegian coast, with many ships wrecking in this area during rough weather.

Around 1,300 passengers and crew were originally on the ship, according to Reuters. The Independent stated that the ship carried 915 passengers and 458 crew.

According to Buzzfeed, the ship had restarted one of its engines, while Reuters reported that it was able to anchor about 2 kilometers from the coast. Some news sources suggest that the ship was finally able to start several engines. The Telegraph reported that the  ship eventually managed to drop anchor in Hustadsvika Bay, between the western Norwegian cities of Alesund and Trondheim.

Loss of power at sea on cruise ships is an issue we cover on a regular basis.

In 2016, there were at least 18 power losses, either complete or partial, of cruise ships operated by the major U.S.-based lines, including problems with the Carnival Elation, Carnival Legend, Carnival Liberty and Carnival Vista as well as the Carnival owned Adonia, Caribbean Princess, Emerald Princess, and Costa neoRiviera, as well as Celebrity’s Summit and Constellation, Royal Caribbean’s Anthem of the Seas and the Allure of the Seas, Silversea Cruises’s Silver Cloud, NCL’s Norwegian Star and Norwegian Gem, Oceania Cruises’ Regatta and P&O’s Oriana.

The Viking Sea experienced engine problems in December of 2016 which kept it stuck in Barcelona.

In August of 2016, the Viking Sea temporarily lost power in Malta.

In August of 2015, the Viking Star lost power in an engine after leaving Tallinn and resulted in the 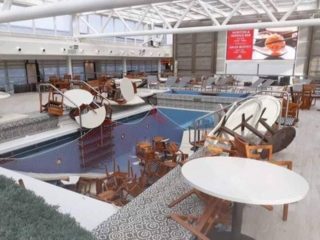 cancellation of the cruise.

Fortunately, most power failures occur in the Caribbean during calm weather. Losing power in rough weather like this current situation is potentially a disastrous situation. It is virtually impossible to safely evacuate over a thousand passengers via lifeboats during a storm in these type of wind and wave conditions.

Crew members tried to ready the lifeboats to evacuate the passengers but waves crashed into the boats and the crew had to abandon their efforts.

@HRSSorNorge, the official account of the Joint Rescue Coordination Centre of Southern Norway, states that there are tugs and offshore supply vessels standing by to try and assist the Viking Sky. The cruise ship is likely to be towed, if it is still unable to get proceed under its own power.

By all accounts, the crew members working aboard the cruise ship performed exemplary during this crisis; the crew efficiently assisted the passengers in being airlifted from the stricken ship.

Photographs from the ship are posted on our Cruise Law News Facebook page (photos left). They demonstrate the extensive damage on the ship caused by being rocked by the high winds and waves caused by the storm.

The Viking Sky left Bergen, Norway on March 14th calling on ports in Norway. It was scheduled to end its current cruise in Tilbury on March 26th.

March 24, 2019 Update:  According to the Independent, the two year old Viking Sky was sailing on a two-week “In Search of the Northern Lights” voyage. “This is the first winter for the Viking Cruises itinerary. When the plans were unveiled, the cruise line’s chairman, Torstein Hagen, said: “No other cruise line can show guests this part of the world like we can.”

“The shipping forecast for the planned voyage was for gale-force winds and very rough seas.”

Mayday was declared at 2pm on Saturday afternoon, 23 March, after the ship lost power.

“Unable to make progress or steer, the ship was hit by extreme waves, with passengers’ belongings thrown around their cabins. An emergency was declared. Passengers put on life jackets and went to the muster stations. It was at one of these locations that a huge wave smashed windows, with a large inflow of water that swept a number of passengers off their feet and caused injuries, including broken limbs.”

“A helicopter evacuation began, with the injured, wet and cold passengers winched off the ship individually and taken in batches of 15 to 20 to the nearby city of Molde.”

“By 10.30am, 479 passengers had been airlifted from the vessel. Viking Cruises says: ‘Currently we understand 20 people suffered injuries as a result of this incident, and they are all receiving care at the relevant medical centres in Norway, with some already having been discharged.'”

“Viking Sky will stay in port in Molde while repairs are carried out. Her next voyage, from Tilbury to Germany and Scandinavia, due to depart on Wednesday 27 March has been cancelled.”

The central question remains why did Viking take their guests into such a storm? The Norwegian press is commenting that the Norwagian ferries did not try and sail in this weather but the Viking cruise ship did anyway. “The captains on the north and southbound Hurtigruten chose to wait in Bergen and Trondheim because of the weather forecast for Saturday.  The cruise ship Viking Sky, on the other hand, chose to pass Hustadvika on the Møre coast in strong winds . . .”

“It was very nearly a disaster. The ship drifted to within 100 meters of running aground before they were able to restart one of the engines,” stated police chief Hans Vik, who heads the Joint Rescue Coordination Centre for southern Norway, according to Reuters (emphasis added).