Shortly after the Costa Concordia capsized, the cruise lines’ PR committee assembled to try and figure out a strategy to minimize the disaster’s effect on the cruise industry.

A decision was made for the cruise lines to issue a series of "talking points" to the media. The Cruise Line International Association (CLIA) and the American Society of Travel Agents (ASTA) distributed "cruise safety talking points" to travel agents, travel magazines and the media.  CLIA embedded the talking points into "updates" on the Concordia crash on its website. CLIA’s president Christine Duffy released "open letters" which travel publications and blogs often published in their entirely, without questioning the accuracy of the information. Travel agents began pitching the talking points to the public in articles like this one from Travel Market Report entitled "What to Say to Clients Post-Concordia."  You can read "6 Talking Points" and other tips from travel agents on how to overcome reluctant clients’ fears and talk them into buying a cruise.

Here are some of the cruise industry’s talking points:

This talking point is part of the "cruising is incredibly safe" message.  It’s false and misleading.  It’s based data from a private consulting firm for the cruise lines which excludes crew deaths and excludes cruises which don’t call on U.S. ports.  This excludes the deaths in the last cruise sinking (the Sea Diamond).   Click on the cases under our section "Maritime Death" and "Disappearances" categories to the left.  You will see that there have been many more than 16 people who die during cruises each year.

The information is further limited to "maritime casualties," like two ships colliding into one another.  But if you take into consideration the passengers and crew who died because of bad cruise ship medical care, murder, lifeboat accidents, deaths during excursions, deaths on Flow Riders and rock climbing walls, drownings, drug overdoses, drunken assaults, being dropped overboard during medical evacuations, and suspicious disappearances – there are far more than 16 deaths during cruises each year for each of the last five years.

Cruising is not just a means of transportation. Cruise ships are floating amusement parks and entertainment venues. Compared to Disney World (which attracts more tourists than all cruise ships combined) or any international hotel or resort chain, there is no place where you are more likely to die than on a cruise ship.

This whopper of a lie makes my skin crawl. Last week, the bloated body of Dayana Arlotti (photo left), a five year old little girl from Italy, was finally pulled from the wreckage of the Concordia.

Read though my blog and learn of other dead children caused by cruise line negligence over the last few years. Read about cruise tragedies involving kids, and the extraordinary efforts the cruise lines take to avoid accountability, like this story.  And this doesn’t include the kids who are sexually abused during cruises, including being molested by cruise line youth counselors. 3.  "No Cruise Ship Has Sunk Since the Titanic"

Some travel agents have taken the "cruising is safe" talking points so far that they are claiming that no cruise ship has sunk in 100 years.

The Travel Market Report quotes travel agent Nancy Yoffe of Cruise Planners, in Spartanburg, South Carolina explaining how she sells cruise tickets in the post-Concordia world: “ . . I would say the last time a ship like this went down was 1912.”

These travel agents may be good salesmen but they are bad historians.

The truth is that many cruise ships have sunk with loss of life.  The last sinking was the Sea Diamond,which nailed a charted reef, and sank just four years ago. 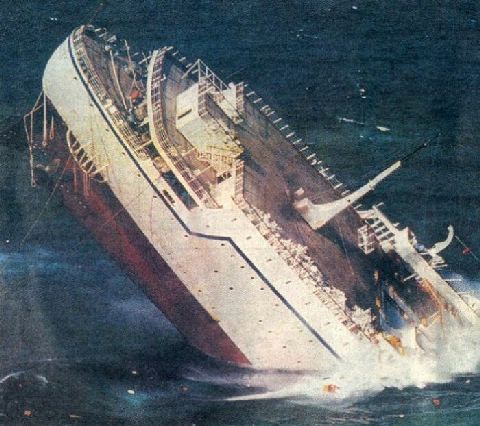 Other spectacular sinkings of cruise ships include the loss of the Sun Vista which burned and sank.

No one can forget the sinking of the Andrea Doria, which ironically enough was home ported in Genoa, Italy where Costa is based. It sank in the Atlantic after a collision with another cruise ship. The fire and sinking of the Yarmouth Castle resulted in nearly one hundred dead passengers and crew.  Add to this list, the sinking of the SeaBreeze I, the Majestic Explorer, the Al-Salaam Boccaccio, Achille Laura, Explorer, M/V Saurav, Queen Of The North, Senopati Nusantara, M/V Bulgaria, Estonia, and the Mikhail Lermontov (which sank in 100 feet of water off the northern tip of New Zealand’s South Island after hitting a reef).

If a travel agent sells a cruise by misrepresenting that no cruise ship sank for the 100 year period between the Titanic and the Concordia, they should be sued for fraud.

4.  "The Cruise Industry is Heavily Regulated"

The basic business model of the cruise industry was perfected by Carnival’s founder Ted Arison in the 1960’s – incorporate the business in Panama and register the cruise ships there too in order to avoid all U.S. taxes and safety and labor laws, and then sell cruises to tax-paying U.S. citizens.

There is no way that an U.S. incorporated business which pays income tax and complies with U.S. minimal wage and overtime laws can possibly compete with an offshore business like Carnival which collects nearly $15 billion a year, pays no taxes, and exploits workers from India and the Caribbean islands who earn as little as $550 working 360 hours a month.

Ted Arison’s son, current Carnival CEO Micky Arison, is carrying on this tradition of avoiding all U.S. regulation and oversight.  He and other executives understand perfectly well that the success of their cruise lines depends on avoiding U.S. oversight at every turn.  No wonder Micky is the richest person in Florida with a net worth of many billions.

Flag states like Bermuda, Bahamas and Panama will never meddle into the cruise lines’ business. Yes, there is the International Maritime Organization (IMO) and its "regulations."  But truth be told, the IMO is a weak and toothless U.N. entity.  It’s "regulations" are mere suggestions.  If a cruise line ignores a IMO rule, there is no consequence. That’s why you have have reputable journalists like reporters at Reuters who are characterizing the Concordia crash as a symptom of the cruise industry’s "lax regulation and supervision," as explained in the recent article "How the Cruise Industry Sails Under the Radar."

5.  "Cruising Will Now Be Safer Now Than Ever"

There is a warm, fuzzy and entirely naive sentiment expressed by travel agents that once a disaster happens, the cruise industry will quickly learn from its mistakes and make changes to improve safety.   The problem is that’s not true with an industry which keeps things secret and does not invite regulatory scrutiny.

For example, two Costa cruise ships were involved in separate collisions in the years before the Concordia crash. The Costa Classica ran into a freighter and slashed a deep gash through the side of the ship. The Costa Europa slammed into a dock and killed several crewmembers. The flag state, Italy, investigated the incident but refused to turn the report over to the International Maritime Organization.  In the article "Costa Cruise Egypt Accident Report is Strictly Confidential," BBC News points out that the IMO cannot begin to assess the accident and consider potential improvements to safety without seeing the report.

After the Concordia deaths, Carnival stated that it would be conducting a full blown audit of Costa to make certain that its operations were being conducted safely and responsibly.  Whether this is happening who knows. This was a PR move, to head off public demands that the cruise line should be investigated by the government.

There is no statement by Carnival that the results of the alleged audit will be released to the public or that it will permit its operations to be investigated by professional and independent maritime experts. That will never happen. If there is an audit, Carnival will keep the results secret. This is the wild west environment of the cruise industry, not the aviation industry which is squarely under the thumb of the Federal Aviation Administration (FAA).

Shortly after the Concordia disaster, ABC News aired a 20/20 cruise special.  I was in the special explaining how the Concordia drama unfolded.  You can watch the first segment of the program here.

The second part of the program showed the problem of excessive drinking and violence.  You can see that segment here. I learned a new phrase watching the show – "cruise drunk."  It has been clear to me for years that there is way too much booze and way too few security personnel on cruise ships.  When I expressed these opinions on the 20/20 show, I received hate e-mails for a week after the program aired.

The ASTA and travel agents took it upon themselves to include talking points in response to the 20/20 program, believe it or not.  The talking points included assurances that passengers don’t get out of line or drink excessively.

Be Honest, Tell the Public the Truth

The cruise industry’s reputation has been tarnished with a lack of transparency over the years.

A post-disaster PR campaign of talking points should start and finish with "be honest" – which is absent from the CLIA talking points.  Instead, CLIA suggests that travel agents should require clients to sign a "waiver" releasing the travel agent from all liabilities, including misrepresentations of the cruises. Why would an agent need such a waiver if they were simply telling the truth?

There is a certain irony about all of these false talking points.  Many life threatening situations which the Concordia passengers faced after the cruise ship struck the rocks can be attributed to false information provided by the vessel’s officers and crew.

Remember, as water poured through the 160 foot gash in the Costa Concordia‘s hull, the officers were dishonest with the guests.  As the cruise ship sank, they lied to the passengers – "everything is okay; the ship had just experienced an electrical failure."  Later, the Costa crew falsely assured passengers – "the situation is under control, go back to your cabins." And no one can forget the lie told by Captain Schettino after he abandoned women and children to die on his ship that he had somehow "fallen into a lifeboat."

CLIA’s talking points, like the lies told by the Costa captain and his officers, perpetuate the cruise industry’s reputation as lacking honesty and transparency.

There are travel agents who don’t rely on someone else’s talking points.  New Jersey travel agent and my friend David Stern has his own warnings and safety videos on his web site.

If you are a travel agent reading this, don’t get caught up in CLIA’s cult of personality.  Be yourself.  Learn about the history of cruise ship fires, collisions, groundings, sinkings and crimes. And then tell your clients the truth.