This evening Royal Caribbean announced via Twitter that that it’s "closely watching a large storm off the coast of Cape Hatteras. We want to be extra cautious when it comes to weather in the area." The cruise line decided that it is canceling the last two days of the current Anthem of the Seas cruise which will skip Barbados and St Kitts in order to "avoid a severe storm & provide guests with a comfortable journey back home."

Is this the same cruise line which recklessly sailed into a much larger storm three weeks ago?

The forecasted wind and wave conditions seem modest compared to the weather conditions forecast prior to the disastrous cruise on February 6th when the cruise ship sailed into waves over 30 feet and encountered hurricane strength winds.

So why the cautious approach today? Is this a cruise line that really learned its lesson?  Is this the result of new decision makers back in Miami who decide whether the Royal Caribbean ships will encounter rough weather? Remember, Royal Caribbean announced that the last storm revealed what the cruise line said were "gaps in our planning system that we are addressing."

Royal Caribbean also said that it was strengthening its storm avoidance policy, and allegedly added resources at its corporate headquarters in Miami to provide additional guidance to its captains.

So is the decision this evening to cut the cruise short the result of more cautious meteorologists and fewer macho captains?  I doubt it. The weather reports seem pretty tame.

It seems that the decision to cancel the remainder of the Anthem cruise is motivated more in order to avoid bad press than bad weather. Why? Passengers are reporting that over 65 people have come down with symptoms of the dreaded norovirus. A code red is underway. If there are 65 official reports, chances are that the true number is much higher. There will be what the cruise lines call "enhanced" cleaning when the ship returns to New Jersey on Wednesday in an effort to kill the noro.  Royal Caribbean’s reputation can’t take a massive noro outbreak on the heels of subjecting its guests to a massive storm earlier this month.

So what happens when the cruise ship returns to port 2 days early?  If this were truly just a weather related event, then the passengers, whose flights home are still scheduled two days later, should be able to stay on the ship. But if passengers are forced to leave the ship early for the anticipated super cleaning, it would seem that Royal Caribbean is more concerned with eradicating norovirus from its huge cruise ship than risking its guests encountering another round of rough weather. 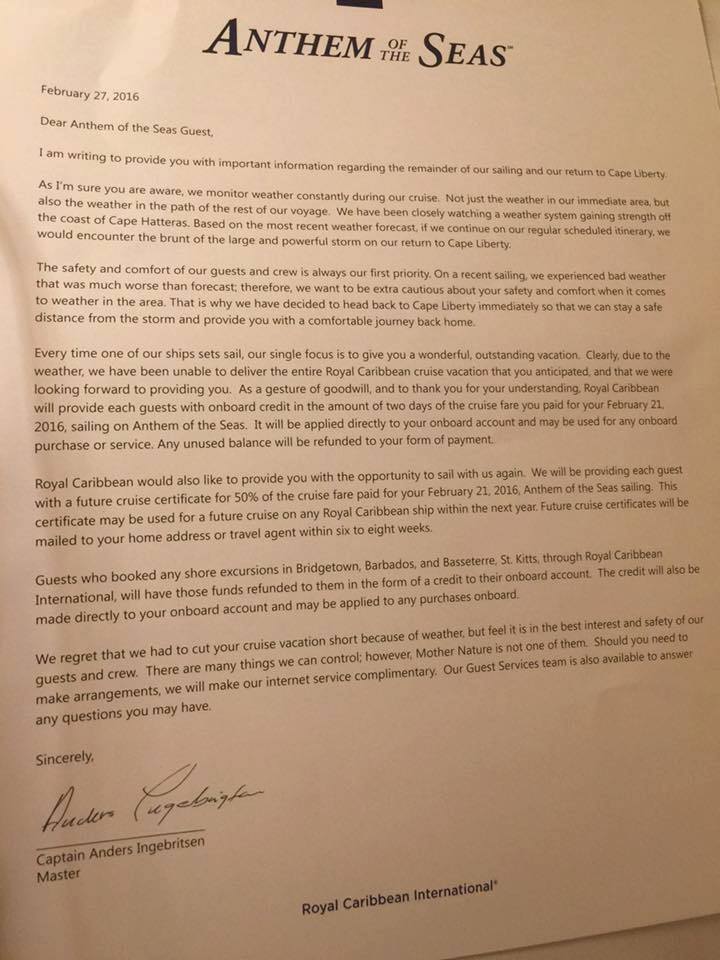