Almost four years ago, the Carnival Triumph lost power due to an engine room fire while the Carnival cruise ship was cruising in the Gulf Of Mexico.  The Triumph lost power to its engines which operated its propulsion systems, shipboard lights, air conditioning, galley operations and hygiene systems. Toilets overflowed as increasingly hungry, tired and frustrated passengers were forced to walk on soggy urine-soaked carpets over the course of four day as the stinky Carnival cruise ship was slowly towed back to the U.S. CNN and other networks covered the disgusting spectacle essentially 24-hours-a-day.

In the process, Carnival – previously marketed as the “Fun Ships” – earned a reputation as the “Poop Cruise” line, a term the media (primarily CNN) coined for the event. The term “poop cruise” is found in the official Wikipedia description for the cruise ship.  “Poop cruise” caught on and was repeated in numerous stories about the cruise line, including in CNN’s exclusive story –  Carnival Knew of Fire Danger Before Cruise, Documents Show (watch video – “Poop Cruise’ should not have left.”)

In 2013, Business Insider explained how Carnival was transformed from the “Fun Ships” to the hapless “Poop Cruise” line in an article styled How Carnival Went From ‘Fun Ship’ To ‘Poop Cruise.’ The article chronicled the Triumph passengers’ disgusting testimonies: “Hallways were flooded with human waste, there was no A/C or running water, and passengers were left to survive on limited food and water.”

Major newspapers and news networks like the Miami Herald, FOX News, New York Daily News and other newspapers including the Daily Mail (the largest internet following in the world – 50,000,000 readers a month) published articles in the last few days about a Florida family who discovered a spy camera and transmitter hidden in their passenger cabin on the Carnival Fantasy.

Ironically, the Fantasy left the same port (Mobile) where the Triumph “poop cruise” was towed back to after it lost power.

As explained by the Miami New Times, the family discovered the hidden recording and transmitting devices during a cruise to Mexico back in early October. The young couple was shocked when they discovered the secret spy equipment and considered the prospect that images of their young son could have been recorded and transmitted to others. They were concerned that other passengers who stayed in the same cabin during prior cruises might have had their privacy similarly violated.  But instead of preserving the devices as evidence and taking the crime* seriously, Carnival ship security disconnected the devices from their power sources, removed the evidence from the scene of the crime, and downplayed the incident as probably involving a prank by other passengers.

We can debate whether Carnival intentionally spoliated the evidence, or whether this was the result of the gross negligence of the ill-trained, bumbling security officer, but the result is the same – Carnival prevented law enforcement from examining the devices in their original condition in order to learn whether images of the family had been captured and transmitted to others. Carnival later claimed to the press (after ignoring the family and their counsel for two months) that the device was “non 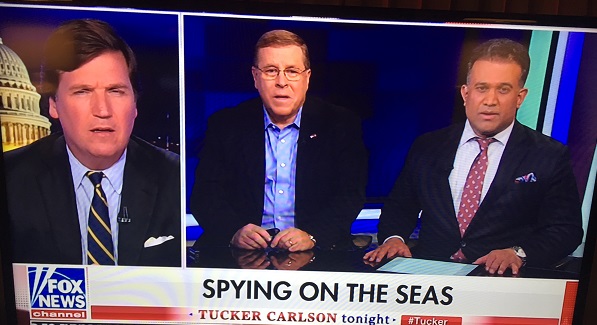 operational,” which should be obvious at this point after Carnival disassembled the devices and disconnected them from their power sources.

When the national news discussed the cruise spy cam and transmitter, guest analysts on FOX News’ Tucker Carlson show laughed at Carnival’s so-called “full investigation” allegedly performed by the shipboard technicians and its shore-side security personnel, which was apparently done without the involvement of either the FBI or the local police when the cruise ship returned to the port of Mobile. They also chuckled at how disconnected recording and transmitting devices could possibly result in anything other than “non-operational” equipment.

But the biggest laughs came when the analysts suggested that the infamous “poop cruise” line had just transformed itself into the “pervert cruise” line.

Yes, there are plenty of perverts on Carnival cruise ships, both crew members and passengers, as evidenced by the fact that the Department of Transportation documented 26 sexual assaults which occurred on ships in the Carnival fleet in just over the last 9 months.

I’ll repeat advice which I have given many times on this blog to families who cruise – watch your kids and watch your drinks. Realize that cruise ships are just floating hotels, where crimes can occur just like on land, but without an independent police force which will preserve evidence and be concerned with arresting the bad guys. And from this moment onward, I will always advise families who cruise on Carnival to look out for hidden spy cameras and the perverts who operate them.

You can watch the video of the Carnival security officer on the Carnival Fantasy disconnecting the recording and transmitting devices here.

*Federal law (18 U.S. Code § 1801) defines “video voyeurism” as merely demonstrating an intent to secretly record or transmit images of a person. Intent can be established by the installation of the hidden recording and transmitting devices in the passenger cabin; whether the devices are operational or not is not relevant to whether a crime occurred.