"Up on deck families were frolicking with Mickey Mouse on a Disney sunshine cruise.

But down below members of their crew were enjoy themselves in a different way – snorting white ­powder in their cabins.

Entertainers who delight young kiddies and their parents, ­restaurant waiters and show ­dancers hoovered up what ­appeared to be cocaine.

And they even used their Disney staff ID cards to chop up lines."

A Disney crew member also claimed that "wild parties and casual sex were the norm" for the Disney Magic crew. According to the crew-member-turned-informant:

“It’s all very family-friendly. On deck, you have people in Mickey Mouse and Donald Duck outfits performing tricks. But downstairs, staff are sniffing coke. So many people are doing it, it’s an open secret. People even do it during their shift. Staff work very long hours and it’s their only release.

We’d go to whorehouses when we were docked.

Or if we were at sea we would have wild parties in the ­cabins. You’d just lock the door and a few people would be sniffing ­almost straight away. Crew would all be sleeping with each other too. Girls never said no when they were high – it was wild."

People Magazine also discussed the  highly controversial case of Disney youth counselor Rebecca Coriam who vanished from the Disney Wonder under mysterious circumstances. Disney is staying mum about what really happened to young Ms. Coriam.  The "investigation" by a single policeman in the Bahamas, where Disney registered its cruise ships to avoid taxes and strict safety regulations of the U.K. and U.S., is a joke.

The Mirror magazine in the U.K. picked up on the cocaine / sex story and published several additional photographs of crew members snorting blow which you can see here. 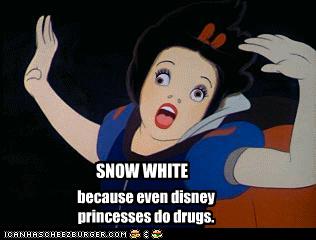 Disney says that it has a strict anti-drug program and it runs sniffer dogs through the crew quarters.

Some readers and many cruise fans may write the story off as sensationalistic.  But my thought is that it’s a real insight into the hard partying life of the crew who cruise passengers entrust with their children.

Are Mickey Mouse, Donald Duck, and Snow White high while entertaining your kids?

It’s something that cruise passengers don’t want to think about.