On Monday, the Miami Herald published an article "Cruise Ship Fires Uncommon, Experts Say." The article was ostensibly about the Azamara Quest cruise ship fire, which is just the latest disaster to plague the cruise industry. The Miami Herald’s article was actually the latest puff piece by a newspaper preoccupied with placing the cruise industry in the best possible light.

The article’s headline "Cruise Fires Uncommon," was attributed to various people who the newspaper suggested were "experts" on the probability on how often such fires occur.  The problem with this claim is that none of the three individuals mentioned in the article are experts in cruise fire statistics.  All of them are either employees, friends or business partners of the cruise industry. The Herald quoted Lanie Morgenstein, who is a cruise line media spokesperson.  She manages the Twitter account of the cruise industry’s trade organization, the Cruise Line International Organization.

The news paper also cites a representative of a fire-fighting company which is under contract with Royal Caribbean Cruises, and an editor of a cruise business publication who says "as a regular cruise ship passenger, I’m not worried about this."  Great, but how about explaining a factual basis for this nonchalant attitude?

The Herald didn’t cite to any cruise fire statistics.  How often do fires occur on cruise ships? The cruise industry and the Miami Herald won’t tell you.  Shouldn’t that be the point of the article?

The Herald cites no facts but tells you that cruise fires are "uncommon." What is "common" or "uncommon" is a relative concept.  It’s ultimately a personal opinion based on an objective, rational and factual analysis of the issue. The Herald didn’t contact any true "experts" with a historical understanding of how often fires break out on cruise ships.

Just last month, Ross A. Klein, PhD, an international authority on the cruise ship industry, testified before the U.S. Senate, following the Costa Concordia capsizing.  This is the third time that Professor was invited by our U.S. Congress to analyze the safety of the cruise industry.  He discussed the number of cruise ship fires (as well as collisions, sinkings, and so forth) which have occurred over the years.  He submitted comprehensive statistics and analysis of such incidents, from "minor" incidents to large scale disasters.  Are cruise ships, as the industry often claims, the safest mode of commercial transportation he posed?

Professor Klein submitted an analysis of various events at sea: Seventy-nine fires on cruise ships since 1990? That’s more than three / almost four a year.  "Uncommon?"  I suppose so as long as it doesn’t happen to you or your family while on a cruise.  But don’t ask that to the five crew members with smoke inhalation injuries, one in critical condition, who were injured in the Azamara Quest fire last Friday.

The Herald ignored these statistics and didn’t mention the injuries to the Quest’s crew. It discussed only the last three "disabling" fires since November 2010: Royal Caribbean’s Azamara Quest and Carnival Corporation’s Costa Allegra and Carnival Splendor.

The Herald omitted several other recent "disabling" cruise ships fires, included the December 2011 fire aboard the Bahamas Celebration cruise ship which sailed from South Florida to the Bahamas and experienced a "potentially disastrous situation" after a fire erupted in the engine room causing the cruise ship to lose all power. It was hauled into the harbor in Freeport by tugboats.

The Herald also ignored a potentially catastrophic gas turbine fire on the twelfth deck of the Queen Mary 2 in October 2011 where passengers were afraid that they were going to have to get in lifeboats in 20-25 foot seas in the Atlantic.

This is not the first time that the Miami Herald has hooked up with the cruise line PR people.  There is a long tradition of friendship between the Herald and the cruise lines.  The Herald’s former publisher and chairman was a member of Carnival’s Board of Directors.  And Carnival has been a sponsor of its travel, food and wine shows for years.

Last month, the same Miami Herald reporter, Hannah Sampson, who wrote the don’t-worry-about-cruise-fires article served up a happy-go-lucky PR piece after interviewing Carnival CEO Micky Arison who had been in hiding after one of his cruise ships, the Costa Concordia, killed 32 and terrorized thousands of other passengers and crew in January.

Ms. Sampson is the "tourism writer for the Miami Herald." Her probing questions revealed this insight into the disaster: "We as a company do everything we can to encourage the highest of safety 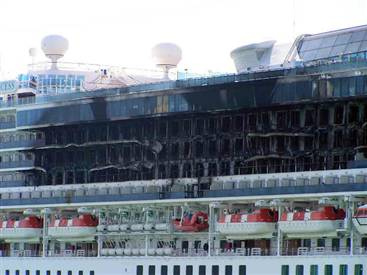 standards . . We continue to offer a great vacation value, a great product, a safe product at a fantastic price . . . People should avail themselves of that product."

Ah, what’s good for Carnival is good for Miami tourism.

32 dead and some poor souls still missing in the capsized cruise ship – and the Herald is helping the richest man in Florida, multi-billionaire Micky Arison, sell cruises?

The Herald chose not to interview Professor Klein despite his substantial experience, expertise and impressive credentials.  Instead, we have a tourism reporter interviewing a cruise line PR representative who tweets for the cruise lines.

Are cruise fires "uncommon?"   You decide.

If this issue interests you, consider reading: "Ten Year of Cruise Ship Fires:  Has the Cruise Industry Learned Anything?"

*It was pointed out to me that the Herald changed the original title of the article from "Cruise Ship Fires Uncommon, Experts Say" to "After Another Cruise Ship Fire, Cruise Safety Back As An Issue."