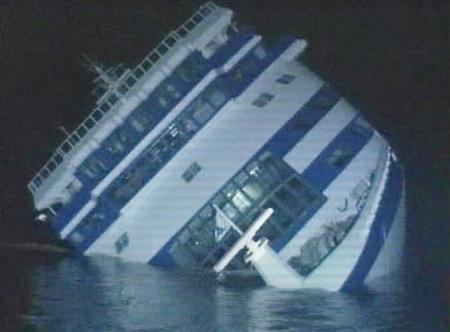 Take a look at the photograph on the left.  Can you identify it?

Nine times out of ten, I bet the answer is of course, its the Costa Concordia.  You know, the cruise ship that crashed into rocks last last month near the Italian island of Giglio.

Wrong.  Its a photo of the Sea Diamond, which capsized after hitting a reef in Greek waters in 2007 and sank with loss of life.

The story of the Sea Diamond is one that the cruise lines and cruise industry supporters ignore while extolling the safety of cruising.

The photo of the stricken Sea Diamond is part of a Reuters article this morning questioning whether the cruise lines benefit from overreaching contractual terms and the absence of consumer laws protecting the public.   The article is entitled "Insight: Cruise-Laws Leave Cruise Ship Victims at Sea." It explains how the cruise lines erect a series of hurdles which make if difficult to seek compensation or justice when things go wrong on the high seas. The journalists interviewed a number of cruise passengers who were injured or lost loved ones during cruises.

The article suggests that foreign flagged cruise ship are subject to Federal laws, international regulations, and the scrutiny of the U.S. Coast Guard, the Centers for Disease Control, the Environmental Protection Agency and the Customs and Border Patrol.  The author did not interview anyone.  The only link was to the cruise industry’s trade organization, Cruise Line International Association.  The article contains no historical perspective, and contains no photographs of sinking cruise ships.

As the cruise industry braces for the negative publicity which will surround the Congressional hearings about cruise ship safety later this month, you will see a series of competing articles like this.  The debate is a healthy one.  The cruise industry will put its best foot forward using a platform of cruise supporters like Cruisemates and Cruise Critic and certain travel agent bloggers.  And real journalists like the folks at Reuters will chip away at the facade and reveal the dark side of the cruise industry.