This has been an exciting week in the crazy world of cruising.

The Allure of the Seas Arrives in South Florida, But No One Noticed:  Last Thursday Royal Caribbean’s Allure of the Seas, the world’s biggest cruise ship, arrived in its home port of Port Everglades after sailing across the Atlantic from the shipyard.  The Allure joins its sister ship in the Genesis class, the Oasis of the Seas, in Fort Lauderdale. Unlike the great fanfare surrounding the Oasis’ arrival last December, the Allure’s debut in South Florida was largely a non-event.  The little publicity 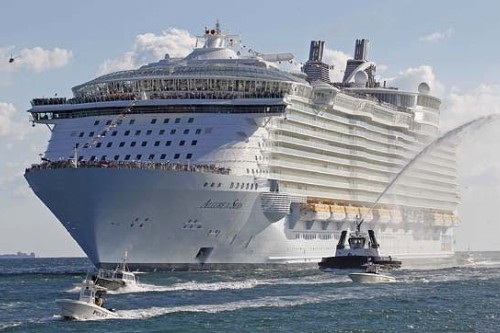 surrounding the mega cruise ship’s arrival was overshadowed by the spectacle taking place on the west coast of the U.S., as tugs towed the disabled Splendor to San Diego following an engine room fire which left the Carnival cruise ship dead in the water off of the coast of Mexico.

Bigger But Not Better:  The arrival of the Allure juxtaposed with the wounded Splendor re-ignited the debate whether this new breed of big ships, which many call floating malls – and which the cruise lines market as supposedly incorporating the cruise industry’s newest technologies – is really a big step backwards.  The LA Times interviewed me and members of the International Cruise Victims in "Stranded Cruise Ship Offers Lesson in Huge Vessels’ Vulnerabilities."

How could a super sized new ship like the Splendor be rendered a powerless tub by a single fire to only one of its six diesel engines?   What about the redundant safety systems which have existed in cruise ships for fifty years?   And aren’t these beasts of a cruise ship the embodiment of everything non-sustainable about the cruise industry?   The Huffington Post addressed the surreal nature of the cruise industry and its huge ships in an "age of dwindling energy reserves and burgeoning population" in an excellent article "Cruising for a Bruising." To Sue or Not to Sue?  The issue of cruise disasters and ambulance chasing lawyers reached an regional, national and international audience following the fire aboard the Splendorr.  On Monday, I wrote an article criticizing lawyers who are trolling for passengers to sue Carnival for the ship fire.  I pointed out three reasons why a lawsuit against the cruise line is ill advised.

My article reached a regional audience when Kevin Gale at the South Florida Business Journal touched on the subject in an article "Carnival Splendor: To Sue or Not to Sue."  Gene Sloan of USA Today’s Cruise Log took the issue to U.S.readers when he wrote "Sue Carnival over Splendor Incident? Don’t Bother, Says Top Cruise Lawyer," Ashby Jones of the Wall Street Journal Law Blog chimed in with "Plaintiffs’ Lawyer to Splendor Passengers: Don’t Bother Suing," and Debra Cassens Weiss of the ABA Journal covered the issue with "Cruise Ship Lawyer: Smelly Toilets and Cold Showers Won’t Support a Lawsuit."   John Honeywell (@CaptainGreyBeard) of the U.K.’s Mirror took the story overseas with "Splendor Passengers Back Carnival."

Carnival v. Wartsila?  Although I expect few passengers to file suit against Carnival, there is no question that Carnival will make a claim against the diesel engine manufacturer, Wartsila.  The Splendor is only 2 years old.  Diesel engines are not suppose to crack a crankshaft, burn the engine room, and shut down a $700 million cruise ship like this.  The Splendor is expected to be out of service for two months.  By my calculations, that means Carnival will lose the fare and onboard purchases of 3,000 passengers for 8 weeks or so.  That sounds like a loss of tens of millions of dollars which Carnival will be expecting Wartsila to pay.

Celebrity Passengers Robbed in St. Kitts:  Four banditos robbed 17 cruise passengers from the Mercury cruise ship on a bus during a cruise excursion in St. Kitts.   As usual the local tourism board proclaimed that such crime is rare.  But the truth is that robbery and murder of cruise passengers are regular occurrences in the Caribbean.  Its unheard of sailing from Vancouver to Alaska, but its business as usual in the Caribbean islands.  Its a function of poverty and drugs.  A couple of cruise lines are now skipping St. Kitts.  One line is now calling on Antigua where a young woman sailing on a Star Clippers cruise ship was murdered ashore in January.  You can’t find a Caribbean island where cruise passengers have not been a victim of a violent crime.  Beautiful, but dangerous.

Cruise Law News (CLN) Moves Up:  The popularity contest and my unabashed self promotion of CLN continue.  CLN is the no. 12 most popular law blog per the Avvo-Alexa rankings.  Expect a top 10 announcement by Thanksgiving.  Many thanks to our readers and those of you who support our blog by leaving comments.  We appreciate your comments, pro or con.