Newspapers are reporting that the Costa Europa cruise ship collided with a pier in Sharm el-Sheikh, Egypt yesterday.  The collision ripped a hole in the hull of the ship and flooded a crew cabin, resulting in the death of three crew member who, unidentified, are described as "an Indian, a Honduran and a Brazilian."  (Technically speaking, when a vessel strikes a pier, it is called an "allision" – "collisions" occur between vessels). 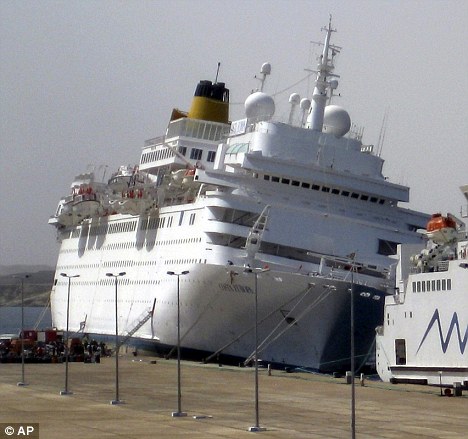 Pursuant to the terms of the passenger’s cruise tickets, if the passengers need to make a claim for medical expneses and compensation, they are required to make their claim in Fort Lauderdale, Florida.

Cruise line officials are quoted as saying that "strong winds" pushed the cruise into a pier as it tried to dock at the port.

It seems that every time a cruise ship hits a dock, the cruise lines blame it on the wind as opposed to poor seamanship at the helm.

The cruise ship was sailing on an 18-day cruise from Dubai to Savona.

The photographs of the Costa Europe show the vessel listing heavily on its port side, in order to keep water ouring into the large opening on the starboard side.

A photograph of the extensive damage to the crew quarters in shown is an article in the U.K. Sun newspaper. The passengers were disembarked, and Costa Crociere is arranging for them to be flown back to their countries of origin.