Those of you who have followed my blog over the last three months know that I have been hard on Royal Caribbean.  I think that this cruise line treats its injured crew members terribly, and it has handled the problem with sexual assaults on its cruise ships even worse.  I also think the Oasis of the Seas is a boondoggle.

So there are my biases.

But I have been rather intrigued by how Royal Caribbean’s CEO, Richard Fain, doesn’t seem to let much bother him.  Year after year he keep coming up with the never ending succession of bigger cruise ships which are announced to the world with great fanfare.

Whenever there is a reporter or news camera surrounding a Royal Caribbean event, there Mr. Fain  is – showing President Clinton around Royal Caribbean’s private "island" in Labadee, Haiti, or riding the flow-rider on the Independence of the Seas in Southampton, or waiving to reporters while spinning around and around on the carousel on the Oasis of the Seas.

It is hard to imagine his competitor – Mickey Arison at Carnival – even trying to get aboard a boogie board. That would be ugly.  But "Fearless Fain" seems to be a former athlete and a natural at things like this.  He obviously is skilled at PR and marketing his Royal Caribbean brand with a hands-on approach.

Now, I will quickly admit that the phrase "Fearless Fain" is not my idea.  Rather it was the title of an article written by John Honeywell a/k/a "Captain Greybeard" who writes an opinion piece for the Mirror in the U.K.  The flow-rider photo above is from Captain Greybeard’s photo-stream on Flickr of the Independence of the Seas ("Who’s the Daddy?")

Speaking of the flow-rider, there has already been one death after a passenger fell and struck his head.  But Royal Caribbean requires all passengers to sign waivers of liability before they step onto the boogie board and try to break their necks. And speaking of waivers, Mr. Fain announced on his "Chairman’s Blog" that the new Oasis of the Seas will be able to expedite passengers riding the zipline over Central Park.  He suggested having them just swipe their sign and sail cards which will acknowledge their waiver of their rights if the line breaks.  No need for long lines, or a lot of

There is an interesting photograph of Mr. Fain signing papers when the cruise line officially took possession of the Oasis of the Seas.  Right in the center of the photograph is an American flag.  Now, this strikes me as funny.  Mr. Fain registered his company in Liberia.  All of his cruise ships fly flags of convenience in countries like Liberia and the Bahamas in order to avoid paying any U.S. income tax and avoid U.S. laws and regulations.

Was this happenstance?  Hardly.  I remember a couple of years ago when a Court in Miami ordered Mr. Fain to appear for a video deposition in downtown Miami in a case when parents alleged that their little girl had been molested by a youth counselor on a Royal Caribbean cruise ship.  Mr. Fain instructed the law firm 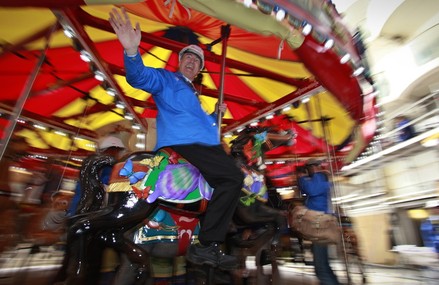 defending the case to make certain that an American flag was positioned behind him as he sat in front of the videographer.  They didn’t have a flag so they had to go and rent one for the afternoon.

As Royal Caribbean tries to fill up the Oasis of the Seas and the Allure of the Seas comes into the fleet next year, it will be interesting to see if Mr. Fain can continue to skillfully market his Liberian corporation to us tax-paying U.S. citizens.