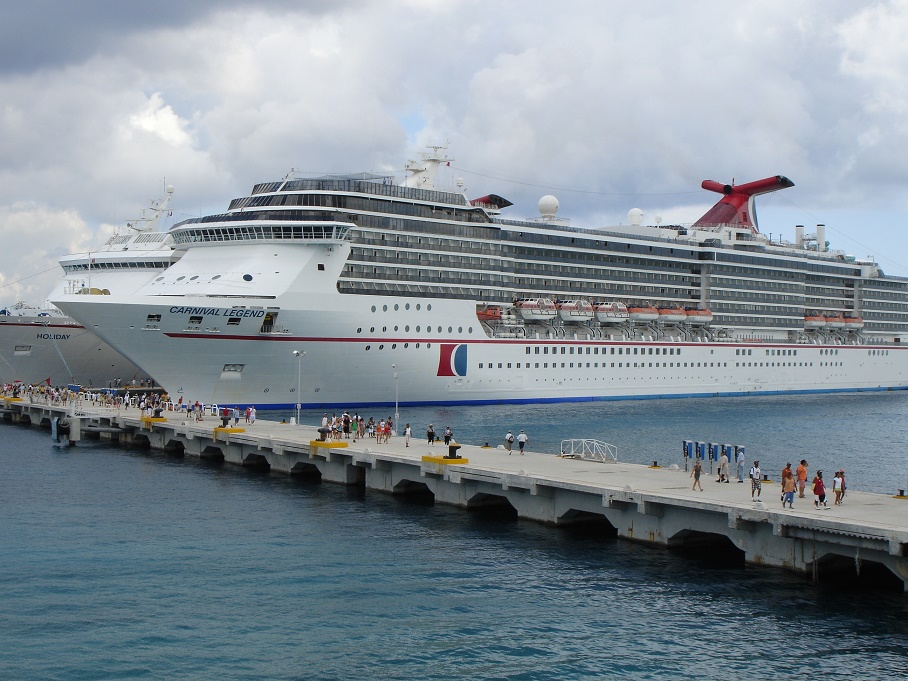 Last Monday I received messages from a crew member friend on the Carnival Legend who said: “im on carnival legend / just as we are almost arriving in victoria canada 6:30 pm, local time, the ship experience a heavy swing towards the side / lots of things fell of in my cabin and for a second got scared then they made an announcement that there was a problem with an azipod on the stb side that caused that and nobody should be concerned and we will be on our way but the speed went down a lot was a bit scary but they say everything is fine  . . . / going very slow arriving late in victoria canada, all shore excursions are canceled.”

A few days later, I received an email from a passenger who described the listing incident as follows:

“I recently finished a one-week Alaska cruise out of Seattle from Tuesday, August 23 to Tuesday, August 30. All went well until the last evening. In accordance with the itinerary, the ship was headed to a final port of call evening at Victoria, BC.

At about 6:00 pm on Monday (August 29, 2016), I was sitting with a friend in a lounge when we felt the shop tilt and stay tilted. A few cups & napkins began sliding off tables. Looking out the windows near to where we were seated, we could see only the upper sky. When I looked across the lounge to the windows on the other of the ship, all I could see was water, the sea, as though it were a wall facing us!

This tilt occurred while the ship was still traveling at speed, which made the sensation worse.

After about a moment the captain, one Captain Gazzano, addressed the passengers by the public address system. His command of English was so poor that I could only understand 2 or 3 words of what he said: propeller, engine, disengaged.

Immediately after the captain’s address, the cruise director, Jaimie Dee, spoke over the public address system. She was superb, essentially re-saying in comprehensible English what the captain had tried to say.

After about 3 or 4 minutes, the ship was righted and slowed its speed.

As I was leaving the lounge to go to the second seating dinner, passengers was leaving the restaurant from the first seating. Some were chatting about the incident, saying that the plates sliding off the table was what made them frightened. I myself saw four or five cakes slide right out of the refrigerated display case in the lounge where I was seated during the incident.

After the ship was righted, the captain addressed the passengers once more as I recollect, perhaps twice. And again, immediately after the captain spoke, the cruise director spoke to re-state clearly what the captain had tried to say.

Apart from the frightening aspects of the mechanical failure, the inability of the captain to address the passengers in basic English was deplorable.”

A reader sent also me a jink to a YouTube video taken by a passenger on the Carnival Legend at the time of the incident. He writes on YouTube:

“Watch the water flow from the pools aboard the Carnival Legend. There was a failure in the ships propulsion system about an hour and a half away from Victoria, British Columbia on Sunday, August 28th, 2016 at around 6:00 pm PST. The ship started to list heavily to the port side. I just happened to be in the area when it happened. Instead if panicking, I decided to film it!”

Wikipedia, strangely enough, already has this description of the incident:

“On August 29, 2016 at approximately 6:15 pm PT while sailing to Victoria, British Columbia, the turning valve in one of the ship’s four engines failed, causing the ship to make a hard starboard turn and listed 30 degrees to the port side, only 10 degrees away from capsizing the vessel. This caused hundreds of dishes to fall over and break and caused both pools to drain out and items to be thrown off the deck. Passengers were directed by crew members to all stand on the left side of the ship to even out the listing. Captain Giuseppe Gazzano had to manually control the ship towards Victoria. There were no reported serious injuries but the ship arrived at Victoria two hours behind schedule.”

September 3 2016 Update: Ship Tilts Cause Concern – Malfunctions In Auto-pilot Cited In Some Reports (prior incidents) via Sun Sentinel in 2006.

We recently received a longer explanation of what happened from another passenger on the cruise ship, who said, in part:

“Towards the end of dinner we heard a ve loud mechanical noise and the ship began to shake violently. The ship then went into a sharp turn. The ship then began to list. I had figured since the seas were so calm it was likely an evasive maneuver to avoid hitting something. I had told my wife to brace for a possible impact. However, the ship continued to turn and continued to list at a greater degree and you could see the water line come up to the window. The entire ship made a creaking sound. We were seated at the aft port side of the dining room and had a good view. Glasses and plates began to fall and shatter. Then a Carnival crew member yelled out for everyone at dinner to get to the starboard side of the ship. My wife and I had already started to do so. The direction was the correct one so no criticism there, but the alarm in the crew member’s voice was disconcerting. My wife then said we had to find the kids that she did not want them to be alone. We knew that both were with their kids clubs and where they were. We, and hundreds of others, left the Truffles dining room, there was some panic and shoving but overall not too bad under the circumstances. I had advised my wife to exit bygoing through the waiters serving area on the starboard side of the dining room. I did so for two reasons, one it was as far starboard as we could go, but if the ship tipped to its side, it would give us a barrier so we wouldn’t slide across the width of the ship. Right before we stabilized into a stable port side list, it did feel as though the ship may tip over. In fact, one woman yelled out, “my god we are going to tip over.” We made our way out of the dining room somewhat consistently stepping on broken dishware and food. We went up the stairs. On the third deck, many people had already began assembling at their muster stations, one crew member was directing people to do so. However, the general alarm had not sounded and we were not going to the muster station without our kids

We made our way to the lido deck (deck nine) where my son was. He stated that they were all advised to go to the starboard side of the ship and did so, but that his counselor had left. He said he was not scared, but hugged us so we know he was. He said he was on his way to get his sister and then the muster station. We were most concerned about her since she was playing mini golf on an open deck with her group. It was at this time, the captain got on the PA system and announced that, “nothing has happened,” to which several passengers responded with expletives.

We were able to get to deck ten and find my daughter, she was visibly very upset. My daughter’s counselor was about to take the children to their muster station and had prepared them for what to expect. We were able to speak with my daughter and her friends afterwards. She had directed all on the deck to the starboard side. She originally advised the kids it was only a sharp turn, but at some point yelled out, “oh s–t.” I can’t blame her for her choice of words but again it underscored that the crew was alarmed. Two of the kids had stumbled while on the way to the starboard side. One fell into the net roping off the basketball court, one slide part way down the deck. The basketball and several golf balls went over the side of the deck. Shortly thereafter, the ship had been stabilized and was now slightly listing to the starboard side, likely a slight overcompensation. We spoke to one of our daughter’s friend’s parents later. They were on the first floor, their room was completely underwater. (There is at least one deck below deck one where there are crew quarters). They had put on their life vests and headed to their muster station. I have travelled extensively by sea and air and have never seen anything like this before.

Before we got underway later that evening, we went to guest services for an explanation. By the time we were done we had gotten four different ones, that it was the stabilizers, it was the propulsion system, it was the steering system, and finally that nothing had really happened. They advised nothing like this had ever happened before, but we later found out that this has happened at least once prior on the Carnival Legend. They were unapologetic and unmoved. They denied that any crew members directed people to their muster stations. This was simply not true. We called Carnival again today. We received a similar response. The representative said they really can’t do anything about it because everyone on the ship was affected. We received no explanation, no apology, and were informed we would not receive a follow-up phone call from anyone. There would simply be too many people to call. It is as though they want to cover it up. Perhaps the situation was not as bad as believed at the time. In reading, apparently this happens from time to time. However, generally it is a weather event which this was not. Rarely it is significant mechanical failure which this appeared to be. A listing of only 14% can cause dishes and plates to fall and shatter and apparently a cruise ship can sustain up to a 40% before it capsizes. Nonetheless it was pretty scary at the time and we were shaken . . .

. . . Only Carnival can manage to have an incident in near perfect weather and seas. It would have been more understandably if it was the weather . . .”